This week’s album was again drawn at random from my collection and provides perhaps one of the only recordings of an obscure tune largely lost to history and an early recording of one of the most popular jazz songs ever written, with the normally sung lyrics replaced by a truly unique and remarkable trumpet performance.

The label is the Decca “sunburst” – Decca had, very generally speaking, three styles of label: sunburst, flat blue, and flat black. Sunburst labels are usually of more interest to collectors as they mark the earliest records issued by the company (from its formation in 1934 through 1937). On sunburst labels an art deco style “Decca” pops out with block letters and a false perspective angle. Decca would later reissue many of their sunburst recordings on the flat blue and flat black labels after 1937. Because of the tremendous quantity of Decca records issued after 1937 and the overall higher value attributed with first issues compared to re-issues, sunburst labels are usually of greater monetary value. This is comparable to what happened with Victor: savvy collectors know that if a Victor label is a plain circle it is almost certainly of little to no value and is very likely to be a reissue. Victor “scroll” labels, on the other hand, are older and more likely to be original issues.

Clyde McCoy, of the Hatfield and McCoy feud McCoys, grew up in Kentucky but moved to Ohio as a young boy with his parents. In Ohio he took up the trumpet and quickly moved from playing at church and school functions to performing on the riverboats. After a successful temporary gig at a Knoxville Resort, McCoy proposed taking the same band to New York. When success in the Big Apple eluded the band they headed west, first to Los Angeles, and eventually to Chicago.  It was in the Windy City where he first performed his best know song, “Sugar Blues,” which was written for him by Clarence Williams and Lucy Fletcher; the song placed on the charts in 1931, 1935, and again as late as 1941. Later musicians, including Fats Waller, Ella Fitzgerald, and Johnny Mercer also covered it. Near overnight radio success with the original recording led to contracts first with Columbia and later Decca in 1935 (the same year this album was recorded, making it one of the earlier Decca records from McCoy). McCoy’s act grew in complexity and became almost vaudevillian in nature, including tremendous “battle of the bands” type face-offs between McCoy’s band and another A-list group of the time. All of these battles ended as “friendly ties.”

The bottom of the 1967 Voy Clyde McCoy Wah Wah Pedal for electric guitar featured McCoy's image. This pedal has clearly seen some use.

McCoy’s most lasting influence on music was not any one song but, rather, a musical effect. A talented trumpet player, McCoy could create an amazing variety of sounds and effects with his advanced technique; foremost, and most popular with audiences, was the distinctive “wah wah” sound, created by fluttering a specific type of horn mute in the bell of his trumpet (I read some unconfirmed accounts that he actually used a toilet plunger, not a mute). You can hear it distinctly at 1:53 in “I’m Gonna Play in the Varsity Band” below and throughout “Basin Street Blues” (click on the link to the Vogue Picture Record recording of it elsewhere online). The effect became so popular and such a recognizable trademark sound for McCoy that the Thomas Organ Company built it into the Vox Clyde McCoy Wah-Wah Pedal for electric guitar in the mid 1960s. The Clyde McCoy Pedal, later named a Cry Baby Pedal, has become a staple effect for guitarists of all genres. In 2002 Vox reissued the Clyde McCoy Pedal with its original vintage look, including with McCoy’s image and signature on the bottom – a feature that the original pedal from the 1960s sported as well. If you regularly skip listening to the clips or the links to the full recordings on this blog, this is not one to miss – McCoy’s talents with the trumpet are quite unique and well worth a listen.

Spencer Williams was a composer, singer, and pianist who helped author some of the earliest standards of the American jazz era. Born in New Orleans Williams was one of the chief collaborators for Fats Waller. In addition to “Basin Street Blues” – perhaps his most enduring song (it is still being recorded by musicians to this day – he penned “Squeeze Me,” “She’ll Be Comin’ Around That Mountain,” “I Ain’t Got Nobody,” “Royal Garden Blues, and “I’ve Found a New Baby” among many, many others. 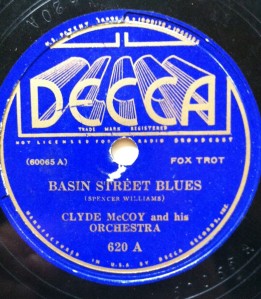 “Basin Street Blues” is a standard of Dixieland jazz bands to this day. It was published in 1926 but really became famous when Louis Armstrong issued a recording of it in 1928. Basin Street is the main thoroughfare of Storyville, which had been the red-light district of New Orleans’ French Quarter from 1870 through the early decades of the 20th century. McCoy’s recording became part of his portfolio of trademark songs and proved so popular it was later reissued on a Vogue Picture Record in 1946 (click the link to see a video of the record, with McCoy’s picture on it, and also listen to the recording in its entirety).

The song has been recorded by Bob Wills, Ben Pollack, Tommy Duncan, Louis Prima, Dr. John, Connee Boswell with Bing Crosby, Ella Fitzgerald with the Sy Oliver Orchestra, Jo Stafford and Frankie Laine, saxophonist David Sanborn, “turntablist” Kid Koala, Sam Cooke, Jack Teagarden, and Liza Minnelli. Some may also recognize the tune from its more recent use on the soundtrack to the major feature film The Curious Case of Benjamin Button. The song’s lyrics went through an interesting, albeit temporary, metamorphosis in the mid-1950s that is quite revealing of the prevailing attitudes towards race relations at that precise time in American society: the lyric referring to Basin Street as the place where “the dark and light folks” meet was altered to the less controversial line that it is the place where “the young and old folks” meet. Thankfully most contemporary recordings (after the Civil Rights era) returned to the original lyrics as Williams wrote them. The McCoy recording, as you might have guessed, replaces the vocal line with McCoy’s own remarkable performance on the trumpet.

If “Basin Street Blues” is an enduring standard still recorded to this day, than “I’m Gonna Play in the Varsity Band”  is the complete opposite. The song was entered into copyright on September 21, 1935 by Chappell and Company of New York. I can find no other mention of it being recorded by any artist excepting this one by McCoy for Decca. The tune is an up-beat song about how a musician will win the girls and make the football players’ jealous through his skills in the college band: band geek’s revenge, Tin Pan Alley-style. It is not a bad song, but simply proved unmemorable and never became a commercial success, despite the fact that one might assume it would be popular with college pep bands of the time. If it was, there is no record of it being performed and no other recording of it by any such band that I could locate.

Walter Samuels was an enormously prolific composer, who wrote music for films and television starting in 1932 (Blondie of the Follies) and ending in 1989 (Harlem Nights with Eddie Murphy and Richard Pryor). Interestingly there was a sizable gap between his song “Chuck a Luckin” on the soundtrack to People Are Funny in 1946 and his tune “March Winds and April Showers” for a 1978 episode of Pennies from Heaven. In all he wrote 32 songs that eventually appeared on a soundtrack. A review of his soundtrack songs, his works for Broadway, and his singles reveals no real chart-toppers.

Like Samuels, Whitcup wrote numerous songs (23 in all) that appeared on film and television soundtracks from 1932 (again, Blondie of the Follies) through 2008, when his tune “From the Vine Came the Grape” was used posthumously for the TV movie That’s Amore!. Indeed many of his songs continued to be used in soundtracks after his death in 1979, including what is probably his most famous number: the song “Frenesi,” written in 1939, which appears on the soundtrack to 1980’s Raging Bull.

Teddy Powell, born Teodoro Paolella, was a jazz guitarist, big band leader, and composer. Powell started as a violinst, then moved to the banjo, and finally picked up the guitar and formed his own band at the age of 15. The band stayed intact for 24 years – a remarkable feat in the 1930s and 1940s, when most groups were dissolving, dividing, and reorganizing on an almost yearly basis. Powell’s band was not one of the big A-list gigs, reaching fame for only one brief period in 1939, though they were able to hire on some highly regarded musicians from other top orchestras – including Benny Goodman and Tommy Dorsey’s. They may have gone upward from that 1939 point, but a tragic fire at a New Jersey nightclub where they were playing in 1941 destroyed all of their instruments. The group never recovered and dissolved in 1944, just missing out on the high-water mark for big band music in the early 1940s.

In researching “I’m Gonna Play in the Varsity Band” I was not surprised to discover almost no information about it online – no recording history, no critical reviews, no references to its performance, no complete recordings, and no description of its lyrics. It is, for all intents, a song that never existed outside of this Decca record. Indeed countless songs – thousands upon thousands – from the first decades of recorded music have likely suffered a similar fate, whether deserved or not. Therefore I have decided to post the lyrics and the entire song here on Zayde’s Turntable, so that any future researcher who might – for whatever reason – have an interest in the tune will find it online, saved for posterity, in at least one location. It seems ironic that despite the hundreds of millions of websites today, not one has the details of this song, which is – after all – only 77 years old.

To win the heart of my co-ed with melody.

And make you football heroes jealous as can be.

But you can safely bet,

I’ll make my college win this game by playing my cornet.

‘Cause I’m the band-leading man,

Decca 620 offers both an enduring classic and a song lost to history. Listening to it made me better understand that all recorded music – records, CDs, cassettes (even 8-tracks) – presents us with a complete program of songs selected for a reason and performed as a whole or in some order for (usually) a specific artistic purpose. I love iTunes and the ability of the listener to craft their own song lists; and the release of singles is, of course, a long-standing practice of the music industry, but there’s something to be said for taking an “album” in whatever form and appreciating all (or both) of the songs on it as an artistic whole. If nothing else it forces us, as listeners, to keep songs that would otherwise be lost to time for whatever reason – be they ahead of their time and not fitting with popular taste in the day when they were released or be they simply bad.  No matter why, if we wanted “Basin Street Blues” we would need to have “I’m Gonna Play in the Varsity Band,” too. Both of them would be on our turntables, if only one of them would stay in our minds and in our ears.

Past posts on Zayde’s Turntable